186 years ago Elizabeth Blackwell became the first woman to obtain a medical degree in the United States. Dr. Blackwell decided to become a doctor when a dying friend confided that she would have suffered less had her physician been a woman.  She wrote about her experiences in Pioneer Work in Opening the Medical Profession to Women, published in 1895.

Despite Dr. Blackwell’s accomplishment, and those of other early women physicians, men dominated the profession of medicine for many years.  Since then, the field of medicine has progressed with important contributions from the many women who followed in Dr. Blackwell’s footsteps.

A Physician census report published by the American Association of Medical Colleges in 2014 reported that 1 in 3 physicians practicing in the United States are women.  In some specialty areas however, women continue to be substantially underrepresented.  Orthopedics is one such specialty area, where only 4.6% of the practicing orthopedic surgeons are women.

We would be remiss if we didn’t recognize the five women physicians of Mendelson Kornblum Orthopedic and Spine Specialists.  Thank you to Dr. Shironda Stewart (Rheumatology), Dr. Wednesday Hall (Pain Management), Dr. Alice Mendelson and Dr. Emily Ren (Orthopedics) and Dr. Anna Babushkina (Orthopedics/Hand) for your “can do” spirit and all your achievements in your respective fields.  We are proud to have you on the MKO team serving our Southeast Michigan communities. 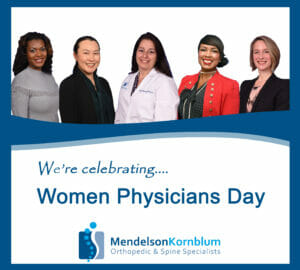