These articles are for general information only and are not medical advice. Full Disclaimer. All articles compliments of the AAOS

Everyone’s spine has natural curves. These curves round our shoulders and make our lower back curve slightly inward. But some people have spines that also curve from side to side. Unlike poor posture, these curves can’t be corrected simply by learning to stand up straight.

This condition of side-to-side spinal curves is called scoliosis. On an X-ray, the spine of an individual with scoliosis looks more like an “S” or a “C” than a straight line. Some of the bones in a scoliotic spine also may have rotated slightly, making the person’s waist or shoulders appear uneven. 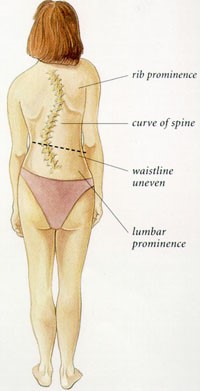 Scoliosis affects a small percentage of the population, approximately 2 percent. However, scoliosis runs in families. If someone in a family has scoliosis, the likelihood of an incidence is much higher – approximately 20 percent. If anyone in your family has curvature of the spine, you should be examined for scoliosis.

In other instances, adult scoliosis can be caused by the degenerative changes of the spine. Other spinal deformities such as kyphosis or round back are associated with the common problem of osteoporosis (bone softening) involving the elderly. As more and more people reach old age in the U.S., the incidence of scoliosis and kyphosis is expected to increase.

If allowed to progress, in severe cases adult scoliosis can lead to chronic severe back pain, deformity, and difficulty in breathing.

The importance of early detection – tips for parents

Idiopathic scoliosis can go unnoticed in a child because it is rarely painful in the formative years. Therefore, parents should watch for the following “tip-offs” to scoliosis beginning when their child is about 8 years of age:

Any one of these signs warrants an examination by the family physician, pediatrician or orthopedist.

Some schools sponsor scoliosis screenings. Although only a physician can accurately diagnose scoliosis, school screenings can help alert parents to the presence of its warning signs in their child.

In planning treatment for each child, an orthopedist will carefully consider a variety of factors, including the history of scoliosis in the family, the age at which the curve began, the curve’s location and severity of the curve.

Most spine curves in children with scoliosis will remain small and need only to be watched by an orthopedist for any sign of progression. If a curve does progress, an orthopedic brace can be used to prevent it from getting worse. Children undergoing treatment with orthopedic braces can continue to participate in the full range of physical and social activities.

Electrical muscle stimulation, exercise programs, and manipulation have not been found to be effective treatments for scoliosis.

If a scoliotic curve is severe when it is first seen, or if treatment with a brace does not control the curve, surgery may be necessary. In these cases, surgery has been found to be a highly effective and safe treatment.

Scoliosis is a common problem that usually requires only observation with repeated examination in the growing years. Early detection is important to make sure the curve does not progress. In the relatively small number of cases that need medical intervention, advances in modern orthopedic techniques have made scoliosis a highly manageable condition. Orthopedists, specialists in diseases of the muscles and skeleton, are the most knowledgeable and qualified group of physicians to diagnose, monitor and treat this condition.

Your orthopedist is a medical doctor with extensive training in the diagnosis, and nonsurgical and surgical treatment of the musculoskeletal system, including bones, joints, ligaments, tendons, muscles and nerves.

This information has been prepared by the American Academy of Orthopedic Surgeons, in cooperation with the Scoliosis Research Society (SRS), and is intended to contain current information on the subject from recognized authorities. However, it does not represent official policy of the Academy and SRS and its text should not be construed as excluding other acceptable viewpoints.