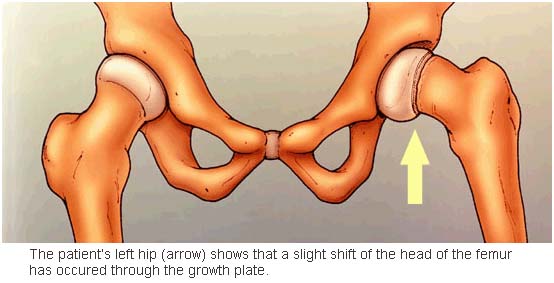 Slipped capital femoral epiphysis (SCFE) is an unusual disorder of the adolescent hip. It is not rare. For reasons that are not well understood, the ball at the upper end of the femur (thigh bone) slips off in a backward direction. This is due to weakness of the growth plate. Most often, it develops during periods of accelerated growth, shortly after the onset of puberty.

The condition is diagnosed based on a careful history, physical examination, observation of the gait/walking pattern and hip X-rays. The X-rays help confirm the diagnosis by demonstrating that the upper end of the thigh bone does not line up with the portion called the femoral neck.

The cause of SCFE is unknown. It occurs two to three times more often in males than females. A large number of patients are overweight for their height. In most cases, slipping of the epiphysis is a slow and gradual process. However, it may occur suddenly and be associated with a minor fall or trauma. Symptomatic SCFE, treated early and well, allows for good long-term hip function.

The physical exam will show that the hip does not have full and normal range of motion. There is often a loss of complete hip flexion and ability to fully rotate the hip inward. Because of inflammation in the hip, there is often pain at the extremes of motion and involuntary muscle guarding and spasm.

The goal of treatment is to prevent any additional slipping of the femoral head until the growth plate closes. If the head is allowed to slip further, hip motion could be limited. Premature osteoarthritis could develop. Treatment should be immediate. In most cases, treatment begins within 24-48 hours.

Early diagnosis of SCFE provides the best chance to achieve the treatment goal of stabilizing the hip.

Fixing the femoral head with pins or screws has been the treatment of choice for decades. Depending on the severity of your child’s condition, the surgeon will recommend one of three surgical options:

Removing the abnormal growth plate and inserting screws to aid in preventing any further displacement.

Complications. There are several potential complications associated with a slipped capital femoral epiphysis. The most common are avascular necrosis (AVN) of the femoral head and chondrolysis. AVN means that the blood supply to the femoral head has been permanently altered by the femoral head slipping. There is no way to identify children at risk for AVN or to prevent this complication. Evidence of AVN may not be seen on X-rays for as long as 6 to 24 months following surgery.

Chondrolysis or loss of articular cartilage of the hip joint is a devastating complication of SCFE. It may cause the hip to stiffen with a permanent loss of motion, flexion contracture and pain. The loss of motion may be a result of an inflammation in the hip joint. This is still not fully understood by surgeons. Aggressive physical therapy and anti-inflammatory medications may be prescribed for this rare complication. There may be some return of motion. 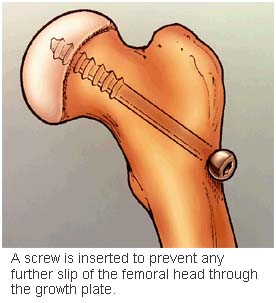 Post-operative care. Most likely, your child will be admitted to the hospital by a pediatric orthopaedist. Surgery is usually performed within 24 to 48 hours. After surgery, your child will be on crutches for weeks to months. A physical therapist will demonstrate how to use crutches. The doctor will give you specific instruction about your child’s weight-bearing status and activity restrictions. Follow the instructions closely.

It is important that your child be followed closely for 18 to 24 months after surgery. After the immediate postoperative period, X-rays every 3 to 4 months are needed to ensure that the abnormal growth plate has fused. Your child may be restricted from certain sports and activities during this time of recuperation. This helps to minimize the chance of further complications. The fusion must be mature enough to prevent further slippage. Then vigorous physical activities can begin.